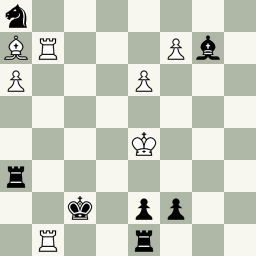 I don’t know why Timman would call the Novotny in Oleg’s study superb? It is not simply a nice finish to the study like Pasman’s 12. Ba5? Very good study by Oleg, of course, but surely it is about something else than Novotny. It makes no sense to give it a special prize because Qh7 has been done before.I like Bazlov’s study a little better than the first prize, but mostly due to the introduction in Pasman’s study, which I don’t like. The flow is excellent and of course Ba5 can be reused.

I agree that the flow is good and that Ba5(+) can be reused, but what is supposed to be the idea of this study? To me it looks like some random action movie. Fighting and shooting all over the place. There is no discernible structure. Perhaps I need to dig deeper, but…

You are right, Jan! I want to ask Pasman: what you mean when you are composing such study?? Milk with beer…

That’s what I always say to Martin. One seventh-rank pawn is dubious, and two is outright cheating.

(Still, he surpassed me in the World Cup using four of these guys. Pervakov judge. Grrrr!)

But I am not a well-known artist, so the quote must come from somebody else.

I congratulate Michael Pasman on this great success! I am very happy about his development. It’s the best study I’ve seen of him so far. A tactically interesting fight with black and white punch lines from start to finish.

I would like to take this opportunity to clarify the following: Steffen Nielsen and Jan Sprenger often write that they do not like, for example, when there are pawns on the 7th (or 2th) rank. This is their very personal opinion and not a generally accepted criterion for the quality of a study. The introduction to Passman’s study is perfectly fine from my point of view. It gets chaotic when everyone invents new rules and prohibitions. We compose art and not just “game like”.

I think Pasman’s study deserves a prize.
I also like Bazlov’s study. A good study by him for a long time, which I can remember later. Personally, I wouldn’t see it as 2nd prize, but further back (too small for me).

My personal favorites are the studies by Steffen Nielsen (both!). I love the “big” ideas and Steffen is very creative. I think both studies deserve 4 points.

It seems a bit strange to me when Erwin l’Ami acts as a consultant to Jan Timman to determine the order of the first studies. Jan would better decide for himself or ask a study expert. It is a common misconception and a certain arrogance that OTB titleholders believe they can evaluate studies.

The study by Stavrietzky and Pervakov is a new version on the anti-castling topic. I think a special prize is perfectly appropriate for that.

Oleg, we’re all talking normally here. Why this fecal language? It is not appropriate.

Martin, Oleg does not use fecal language, or only very rarely so. He uses genital language. While we Germans swear using words like shit, asshole, etc., Italians, Serbians, Russians, etc. swear using words like dick, cunt, your mother’s pussy, etc. Which is arguably more entertaining. Italians give a special twist to this by replacing the mother by the Madonna (=the Virgin Mary), but they are still no match for Serbian/Croatian.

Here is the overview of swearing cultures around the world.

(End of off-topic rant. I reply to your post below.)

One might well be of the opinion that the first prize is not “good enough”, but to write here that this study is not even worth the garbage is not exactly a motivation for Pasman. We should definitely see his progression!

Martin, on the topic of asking OTB players. I agree that this should be done with great caution, and only on very specific aspects on which they are competent. For example, are variations and evaluations really as humanly clear as the author writes? Are important candidate moves missing? It is possible to solve it at least in principle, or does one get lost in a dense web of variations? Does it really show something surprising or paradoxical? I think on these aspects strong OTB players have something to contribute, and you can synthesize their input with your own judgment.

Of course, they are not—or at least not automatically—qualified to judge greatness of idea, originality, economy of construction, build-up of tension, etc. But I don’t think that Jan simply averaged his score with Erwin l’Ami’s, but that he asked for an opinion on specific aspects.

I didn’t mean to personally attack l’Ami. I don’t know him personally at all. He probably just wanted to help. But the order of the first studies is not unimportant. Everyone has their own experience in their specialty …

Martin, I see you like milk and beer in one glass? Good luck!))))

Some viewers are looking on painting of nature  and see only the house or the river, but does not see the whole picture .

Composing is the art and we have to see the  whole  picture of the study.

This is what Timman (in the past second chess player in the world after A.Karpov and today one of best composers) and L’Ami (chess Elo more then 2620 with good experience in studies) and others saw .

Main part of the study there is a struggle against black’s f2 pawn.

So first Black prevents from white to capture f2 pawn by 2 Nowotnies – sacrifices knight and bishop (of course this is not the only idea of the study) .

And then white on his turn sacrifices 2 rooks just in order to capture f2 pawn. Timman correctly defines Ra3!! move as “The highlight of the study” , so he correctly finds the main idea of the composer.

After eliminating black pawn white is in counter-attack in order to enable this time white’s promotion and we see 2 interferences on a5 – first with white rook and second with white bishop.

All is done in good flow with surprising moves by Black and White (as correctly Martin pointed). This is the beauty of chess and chess composition. This is why I so like to compose and create studies like this one.

This is why Timman awarded the study a first prize.

Of course this is a personal opinion and not a rule. I am happy to explain my opinions, because I believe they are well founded.

A) There are two pawns on the seventh rank. I keep forgetting who first called this “miraculously unpromoted pawns”. My dislike of these pawns has two reasons. 1) Why did Black not earlier promote a pawn instead of advancing a second pawn? 2) Two pawns on the seventh rank breaks with the convention that tension should build up (and be released) during the solution. Here the tension is already there in the initial position. This is perhaps my main critique.

B) The rook on b1 and the rook on e1 stare at each other. It seems to be generally accepted, that this tension should be avoided if possible in the initial position (I have heard noone argue otherwise). In my own 4th hm I also have a queen en prise on a6. I was unable to create the introduction without it and probably Pasman had the same issue in his study.

C) The White pawns are on the e and f files, the same files as the Black pawns (there have been cross captures in the previous play). This is minor, of course, but still something that I would like to avoid in my own studies.

D) This is very minor and probably nitpicking: But in tactical studies I prefer that the White king is further down the board than its counterpart. Here they have swapped places. This is purely to make it more game like.

Ok, these are all minor parts of the study composition and I break my own rules all the time for the sake of ideas and ambition. Still it is something to be considered. In the initial position of Pasman’s study there is absolutely nothing that reminds me of a game position. Like already stated I like the tactical flow of the rest of the study very much. Flow can be the idea as well (I know you people will disagree on this).

Sergiy! You used to comment on the prize studies for each tournament in the thread’s head posting. This was always interesting to read, especially in cases where I did not agree. I suggest that you take up this habit again.

I found these studies by Korolkov with similar moves of queen and rook. How serious is that in relation to my study in Timman 70?

Your study could be considered a development of the Korolkov’s theme but Kasparyan already improved it in his study. It’s better than yours in everything. So, a commendation from me for making the same with different pieces.