Here’s a game proving legality of the starting position in the Popov’s study.
So, the award is presented, Popov’s study legalized, likes and dislikes buttons already tested – it’s time to start the analysis of the judging and prize studies of this tourney. It attracted 49 authors from 19 countries who sent in 62 entries. It seems that it was not easy for the judge to distribute top prizes among the best works. He awarded the victory to five studies. It is unlikely that all of them are equal, and their authors enjoy this prize-sharing to the same extent. But I liked so much the judge’s idea to draw the content of five studies in one picture, that the desire to criticize him for his indecision has evaporated like dew in the sun. The studies are so different and expressive that each of them is easily discernible in the picture. 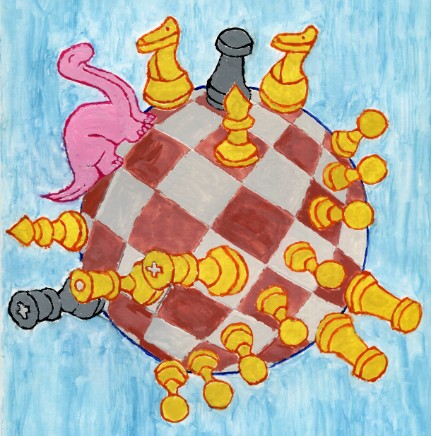 At the top Gromov’s two knights and one bishop are squeezing Pervakov’s black rook, a little lower we see Popov’s eight pawns lined up before the promotion rank, at the bottom Costeff’s two rooks are rehearsing doubling trick, and on the left side the kings and the white queen Nilsenaminski are staging a sharp performance with a mate finale. Tarasaur is looking at all this from a stalemate jail where Didukh’s imprisoned bishop told him a funny joke. Of course, it makes sense to put all of these studies on the same chessboard ball! Or maybe I just ate too many fried mushrooms, and I see things now. 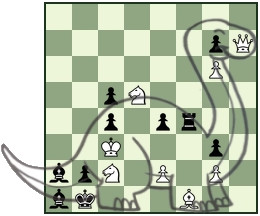 My prize. When I am unable to compose a good study, I start making jokes. Sometimes successfully.

G.Costeff. We have a complete Brunner-Turton doubling on the White side, and only formal one from black rooks, because the try is absent. Anyway the study’s content is complex enough and the prize distinction is merited.

M.Gromov, O.Pervakov. I don’t like the drawish material “2N + B vs. R” as much as it is overestimated by the computer. But I liked this study because it is smart and subtle. Lately, sensible studies have become a rarity and the awards are packed with primitive tactics. It’s good there are sober heads to show us the beauty of thinking.

M.Minski, S.Nielsen. The case where sacrifices don’t irritate. A very clever king participates here. His spectacular temporary refusal of capturing the rook at the beginning of the study helps White to patch a hole in the mating net. The best study of the tourney.

Either the tourney is strong, or I am too kind after mushroom dinner. For the moment I like everything. Alas, there is a black spot – Smolilo (resin, tar – in Russian is pronounced ‘smola’, sounds almost like Samilo). Again Vladislav gave him a prize for a lousy study! It’s not even funny any more.